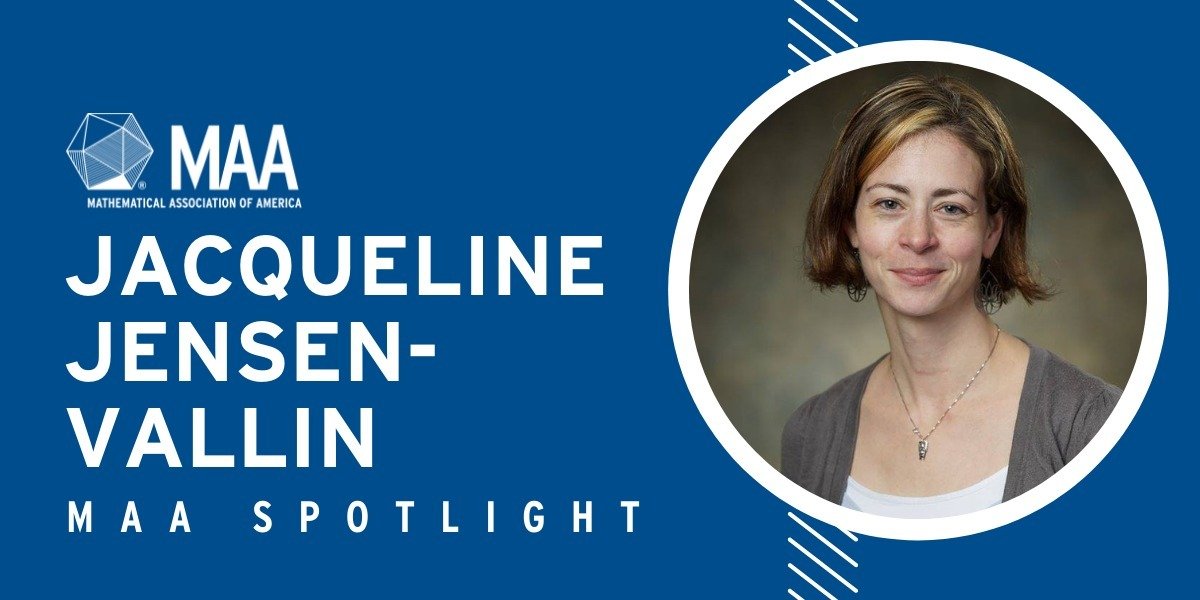 A Happy Accident and a Lifelong Legacy

Jacqueline Jensen-Vallin’s MAA story began as something of an accident. As a recent Ph.D. graduate from the University of Oregon, Jensen-Vallin was accepted as a Mathematical Association of America (MAA) Project NExT fellow. “I have to admit,” she recalls. “I assumed that I needed to be a member, so I joined.” Though that isn’t the case – MAA Project NExT is open to any and all new or recent Ph.D.s in the mathematical sciences – Jensen-Vallin never regretted her decision. Twenty years later, as Jensen-Vallin concludes her seven-year tenure as editor of MAA FOCUS, she is grateful for the mix-up and for everything it has brought into her life.
As a high-schooler, Jensen-Vallin had always loved mathematics. However, like many students, she was told that the only career one could have with a mathematics degree was teaching. This would not have been a problem if her AP Calculus teacher hadn’t told her she wouldn’t be a good teacher. “You’d take it personally every time a student fails,” he told her. So, Jensen-Vallin switched directions and started her undergraduate degree at the University of Connecticut as an English major. “It took me about a semester to realize that teaching was one of the primary careers for English majors, too, so then I switched to psychology.”
That said, mathematics never quite left Jensen-Vallin’s mind. When she reached her senior year, she needed another class to fill her schedule, so she took Calculus III. Jensen-Vallin fell back in love with mathematics, so she excitedly packed Introduction to Proofs, Complex Numbers, Modern Algebra, Analysis, Probability, Differential Equations, and Linear Algebra all into her final year of undergraduate. “Looking back, I wouldn’t recommend this for other students, but it was fun at the time.”
Jensen-Vallin still wasn’t sure what she would do with a degree in mathematics, but she was determined to pursue it. So, she trekked across the country to the University of Oregon to earn her Master’s and Ph.D. in mathematics. Once she got there, she realized that she actually loved teaching. Her AP Calculus teacher hadn’t been completely wrong – Jensen-Vallin did take it personally when a student struggled, but the feeling when she witnessed a “lightbulb” moment was worth it. Shortly after she completed her graduate studies, during her first year as full-time faculty at Sam Houston State University, she joined MAA Project NExT.

Through MAA, a whole new world opened up before Jensen-Vallin. At first with MAA Project NExT, and later through participating in MAA Committees, she found a new, connected community that she hadn’t experienced before. Her confidence grew as she attended social events and receptions at MAA MathFest, eventually building up the courage to walk up to anyone she was interested in talking to and striking up conversations. When asked about any advice she’d give to young mathematicians looking for community, she said, “I know it’s hard for new people to feel bold enough to do that, but just walk up to somebody. You’ll find someone who will help you find your way.”

I know it’s hard for new people to feel bold enough to do that, but just walk up to somebody. You’ll find someone who will help you find your way.

At around the same time, Jensen-Vallin became interested in the MAA newsmagazine that she received six times a year in her mailbox: MAA FOCUS. The magazine was different from other mathematical publications she’d read. It was more inviting. The articles were easier to digest than journal articles, and she found herself frequently picking them up in between classes or during office hours. Eventually, she began contributing pieces to the magazine. She appreciated the avenue for sharing her experiences and talking openly about topics or ideas. When one of her colleagues suggested she apply for the recently opened position of editor, Jensen-Vallin applied because she couldn’t think of a reason not to. She never anticipated the acceptance phone call she received a few weeks later.
A mix between excited and overwhelmed, Jensen-Vallin went out and immediately bought books about magazine publishing and design. She dove into learning the formalities of the publishing process for her new role to be ready for the challenge. During that first year, MAA FOCUS went through an elaborate redesign, growing along with its new editor. Jensen-Vallin began introducing new columns, including “Meet a Member” and “Section Happenings,” focusing even more on the people and experiences that make up MAA. At around the same time, MAA reimagined its mission as well, focusing on four core values: Community, Inclusivity, Communication, and Teaching & Learning. Jensen-Vallin took a particular interest in inclusivity, having seen the diversity of the mathematical community first-hand at places like MAA MathFest. She became determined not only to make diverse voices heard, but to make them recognizable staples of MAA FOCUS. 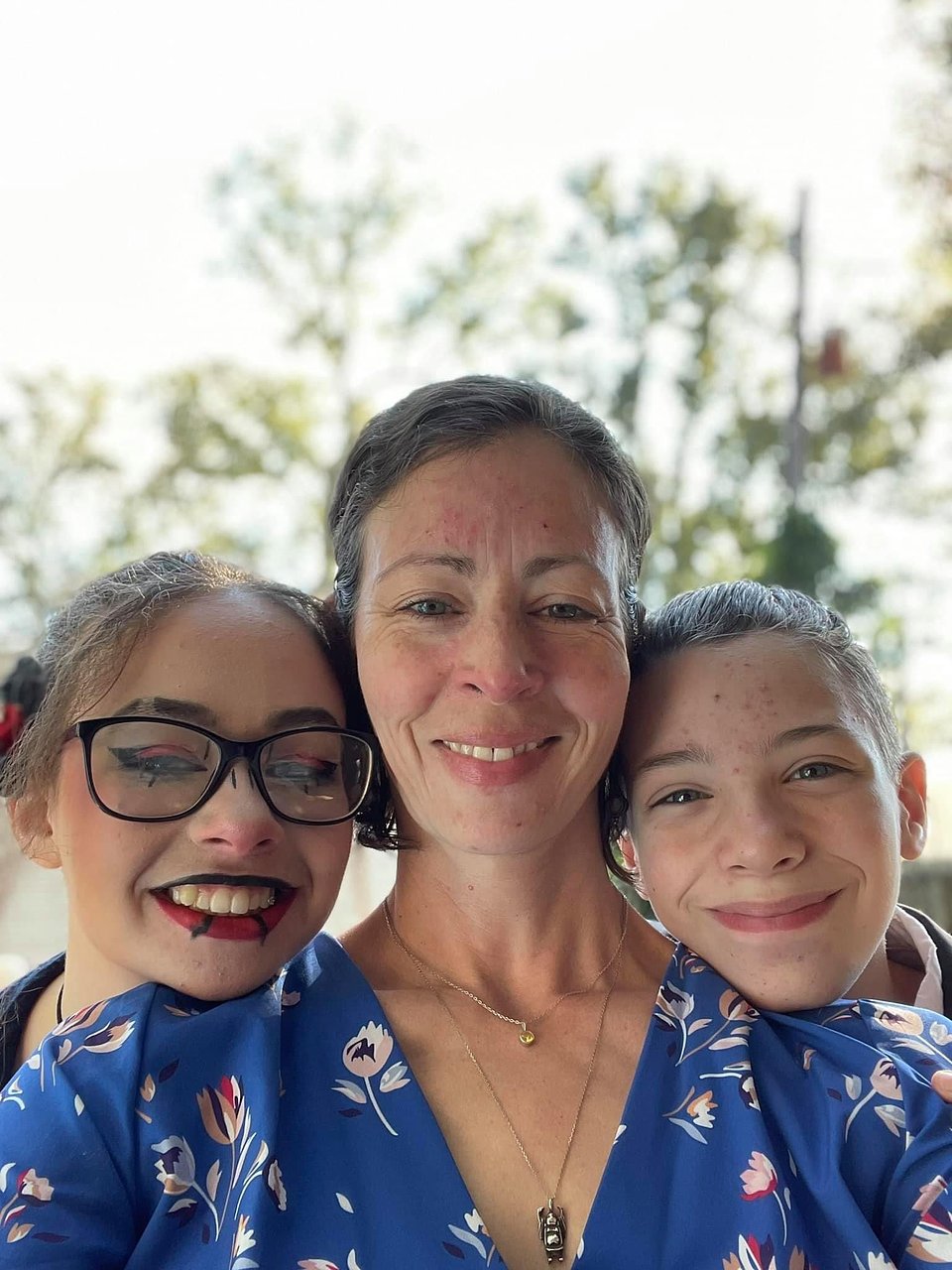 Now, seven years later, MAA FOCUS is transformed under the leadership of Jensen-Vallin. Looking back, she recalls the most rewarding moments as those when a piece she had been working very closely with an author on finally made it to print, such as Jessica Deshler’s piece on being pregnant during graduate school. She looks back on the ways in which the role pushed her out of her comfort zone, such as when she approached Grant Sanderson and Eugenia Cheng about contributing to the magazine. And most of all, she remembers the excitement and joy of passionate authors, palpable in their voices or emails.
When asked about some of the risks she took with the publication, Jensen-Vallin said, “Some people will get mad about these things, but they need to be said, and there are people out there waiting for these things to be said.” We at MAA are extremely grateful for Jacqueline Jensen-Vallin’s dedication to MAA and MAA FOCUS over the past seven years. Her leadership has been an integral part of our organization’s evolution, and we hope to continue working toward her vision for the future.

Some people will get mad about these things, but they need to be said, and there are people out there waiting for these things to be said.