From Struggling with the AMC to Writing it: How One Math Professor Learned to “Wrestle with Math”
Share 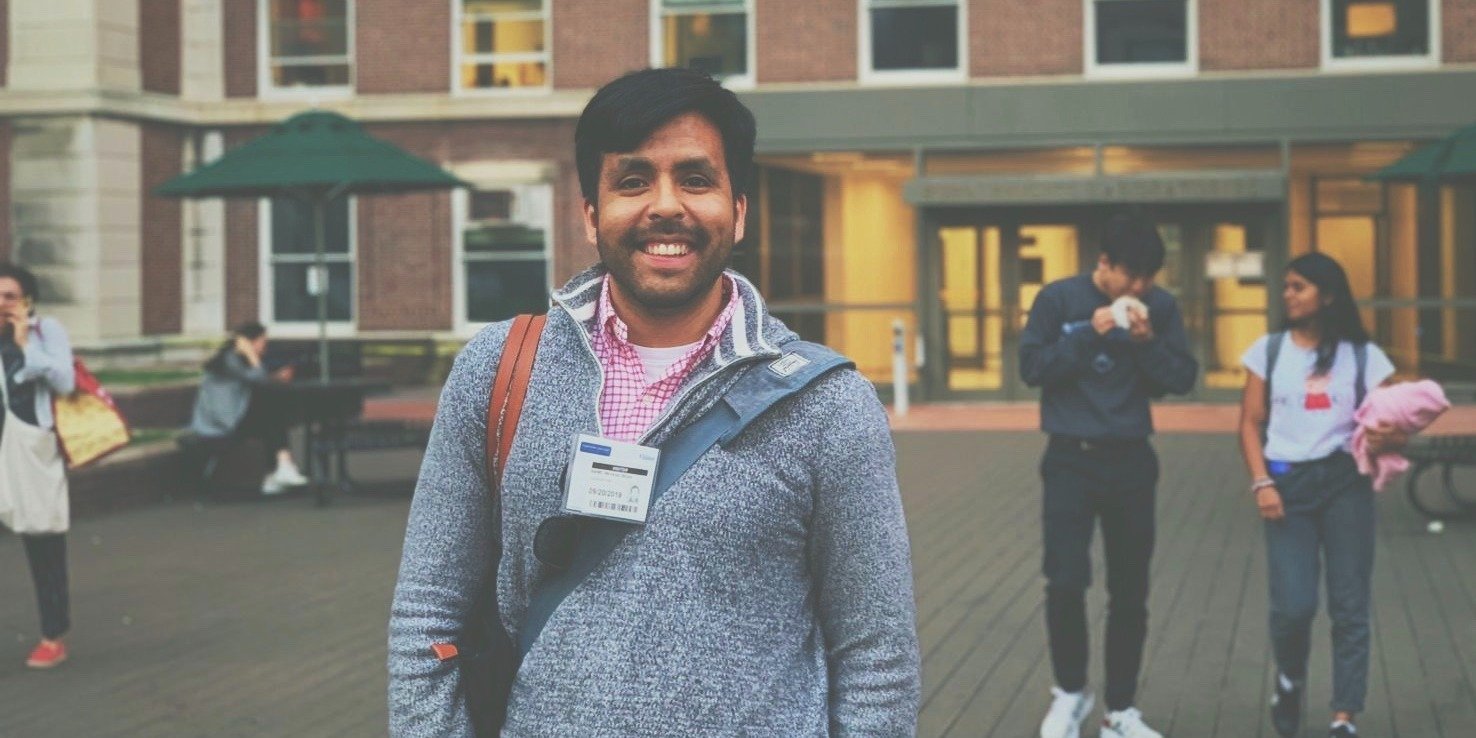 From Struggling with the AMC to Writing it: How One Math Professor Learned to “Wrestle with Math”

“Dripping water hollows out stone, not through force but through persistence,” he recited with ease. 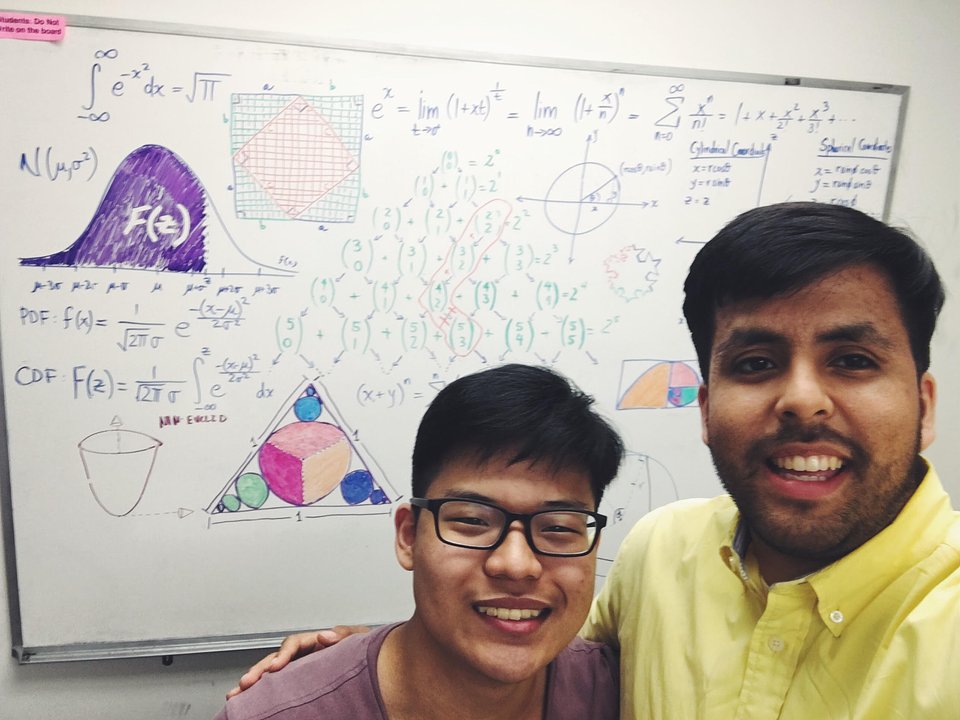 Bryan Nevarez, known to his students as "Mr. Nev," and Phillip, one of his students at Think & Write, in front of a math-filled whiteboard.

Bryan Nevarez, a current adjunct lecturer at Queens College and teacher at Think & Write, always considered himself to be good at mathematics, but wasn’t always enthralled by the subject. He did well in math classes, “but that was it,” he says. “It wasn’t like I was doing it at home or in my free time.” As a child, Nevarez fell in love with basketball, but one ACL injury later, he was searching for a different, far less physical, hobby.
One morning in the ninth grade, Nevarez was told that he would be taking the AMC, or American Mathematics Competitions. “What I knew about the AMC was that they were movie theaters,” recalls Nevarez. It didn’t go well. He only answered the first five questions. Despite his score, the exam had sparked something inside of him. The questions were different from anything else he had seen in class. “I was completely taken aback because normally I was able to solve problems,” Nevarez explains, “but I realized that these problems were at a different level.” The challenge of the exam excited him, and he was determined to learn more.
Math soon became a large part of his life. Nevarez spent hours studying and reviewing the AMC exam booklets to prepare himself for the next competition. “Without exaggerating, that one exam altered the course of my academic career,” says Nevarez. He further explains, “The problems in the exam, along with the solutions that MAA provided, unveiled a much more challenging and thought-provoking side of mathematics.” From that one day in ninth grade, his appreciation for mathematics has had a profound impact on him “both as a student and an educator.” Although he has now transitioned to being a mathematician instead of a basketball star, Nevarez still loves to watch his favorite sport whenever he can. Like Nevarez, his favorite basketball star, Michael Jordan, also had a rough start to his career. The record-breaking athlete didn’t make the varsity team his sophomore year of high school. With practice, Nevarez and Jordan seemed to both be able to overcome obstacles.

Without exaggerating, that one exam altered the course of my academic career.

Bryan Nevarez on his experience taking the AMC.

After high school, Nevarez attended Queens College where he met the “best professor [he’s] ever had,” Saeed Zakeri, who he still sees from time to time on campus. Professor Zakeri, as Nevarez explains, has a way with his explanations; not only is his instruction clear, but his demonstration is masterful, making any student feel like a successful mathematician. After Queens College, Nevarez continued his education at the University of Michigan-Ann Arbor.
Now, Nevarez is back as an adjunct lecturer at his alma mater Queens College and is using his own experience with math to bond with his students at Think & Write, a test-prep and learning center for students in grades K-12 in Long Island. When asked about his personal pedagogy, Nevarez responded, “I try to humanize mathematics.” He then goes on to explain that he tries to relate to his students in their own struggles. While he is accomplished in his field, Nevarez was adamant that he continues to learn more each day from his colleagues and his students.
Like his most inspirational quote, “Dripping water hollows the stone, not through force but through perseverance,” Nevarez believes that persistence is the key to life. If he had not taken the initiative to learn and grow his own mathematical understanding, who knows where he might be now. The quote is proudly displayed on the wall inside of the Bryant Park subway station in New York City, and each time he sees it, Nevarez is once again reminded of his own determination.
Though his first AMC performance wasn’t perfect, Nevarez’s persistence in mathematics gave him a different motto that he often shares with his students — wrestle with it. Be the water on the stone, and over time, you will break through. In order to learn, you need to struggle. Thankfully, struggling with a teacher like Nevarez might not be such a struggle after all.
MAA is proud to have teachers and mentors like Bryan Nevarez in our community to grow and encourage students to pursue mathematics and broaden their horizons. In addition to his work, Nevarez is now a vital member of the AMC 8 Editorial Board. When asking him about his experience so far, Nevarez continued to express his fascination with the competition. Everything about it, from the discussions to the problem creation, once again, opened up a new perspective. Much like his students, he still wrestles with mathematics, and we are grateful he chose our community to continue to do so.
MAA Spotlight

One of MAA’s core values is community. We are extremely grateful for the diverse and exceptional community of professionals, students, and math enthusiasts that comprise our organization. With our MAA Spotlight series, we highlight some of our members’ remarkable experiences, accomplishments, and stories. Know someone that we should feature? Fill out this form!