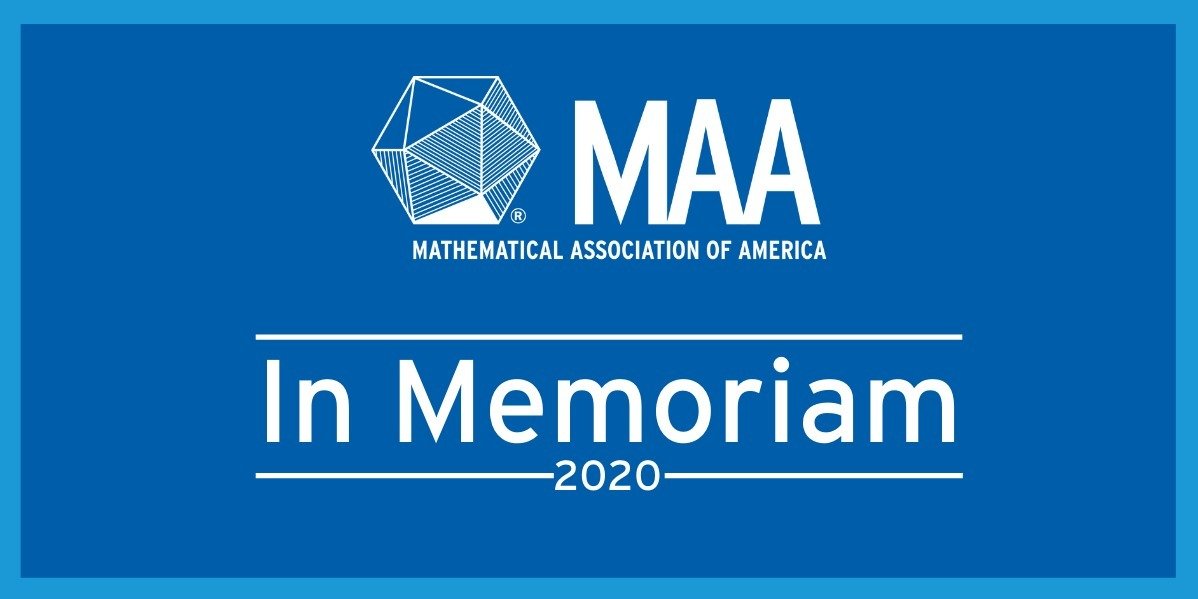 Cecil Rousseau passed away on April 10, 2020, at the age of 82. He was Emeritus Professor at the University of Memphis and a member of the MAA for 50 years. Known as C²R (“C-squared-R”) to students and colleagues, Rousseau played a major role in the establishment, growth, and success of the U.S. Mathematical Olympiad Team. He led the USA International Mathematical Olympiad delegation for several years in the 1980’s and 1990’s, including the 1986 team that tied the Soviet Union for first place. In 2012, Rousseau received the prestigious Paul Erdös Award, and he was Erdős' 5th most common co-author, with 35 joint papers. Rousseau served as the Managing Editor for the Problems Section of SIAM Review. For the MAA, he served on the USAMO/USAJMO board for mathematics competitions, the College Mathematics Journal editorial board, and the Committee on Competitions. More information about Rousseau’s life and career can be found in this remembrance from the University of Memphis, an older U-M article and his obituary.
Carl E. Behrens, Jr. passed away on March 19, 2020, at the age of 87. He was an energy policy analyst with the Library of Congress’s Congressional Research Service from 1975 to 2014, and a member of the MAA for 18 years. Between 2008 and 2019, Behrens served two terms as Chair of the SIGMAA on the Philosophy of Mathematics, as well as two terms as its Program Director. Among a variety of talks and sessions at national meetings, he spoke on “What are mathematical objects: An empiricist hypothesis” in 2006. Behrens was the co-editor of Using the Philosophy of Mathematics in Teaching Undergraduate Mathematics, part of the MAA Notes series.

Katherine Johnson passed away on February 24, 2020, at the age of 101. Johnson was the main character of the Hidden Figures book and movie which chronicled the successes of African-American women who were “human computers” at NASA during the “space race” of the 20th century. Johnson worked for NASA from 1952 to 1986 and was critical to the success of manned US space flights, especially the historical missions of the 1960’s. For NASA, she made the necessary calculations in orbital mechanics (e.g. trajectories, launch windows) for missions to succeed, and, as reported in The Washington Post, in 26 signed reports for the space agency, and in many more papers that bore others’ signatures on her work, she codified mathematical principles that remain at the core of human space travel.” Johnson was awarded the Presidential Medal of Freedom by President Obama in 2015. Significantly more information about her life and career can be found in an article in an NPR article, an article in the Philadelphia Tribune, and her obituary.