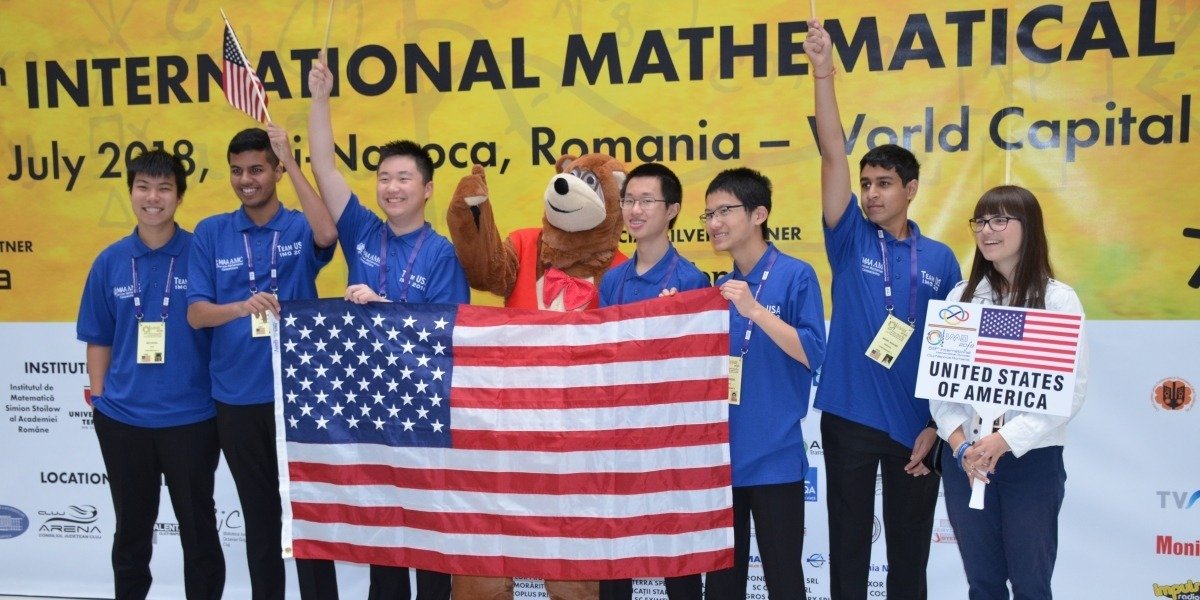 WASHINGTON, DC - The U.S. team won first place for the third time in four years at the 59th International Mathematical Olympiad (IMO) which took place in Cluj-Napoca, Romania on July 3-14, 2018, with 116 countries participating. Prior to a fourth-place finish in 2017, the U.S. IMO team won first place in 2015 and 2016 in the prestigious international competition. In 2018, the International Mathematical Olympiad brought together the top math students from around the world with 615 student competitors.
The six U.S. team members also took home five gold medals and one silver medal for their individual high scores in the competition, known as the olympics of mathematics competitions for high school students. The first place U.S. team score was 212 out of a possible 252 points. The teams from Russia and China took second and third place respectively in cumulative team scores.
The 2018 U.S. International Mathematical Olympiad team is: Adam Ardeishar, Andrew Gu, Vincent Huang, James Lin, Michael Ren, and Mihir Singhal. Gu, Huang, and Lin are returning team members from 2017 and Lin earned a perfect score.
“We are very happy to place first for the third time in four years, highlighting our country’s consistent mathematical talent and problem-solving capabilities among our high school students,” said Michael Pearson, executive director of the Mathematical Association of America. “This shows the strength of the MAA American Mathematics Competitions to build the problem-solving skills that students will use in the future to positively impact society. With the IMO team representing the top talent from the more than 300,000 students who participate in the MAA American Mathematics Competitions annually, we can look ahead to a growing population of problem solvers,” he said.
Students qualify for the U.S. IMO team by participating in a series of competitions provided by the Mathematical Association of America’s competitions program, called the MAA American Mathematics Competitions (AMC). More than 300,000 students participate in the MAA AMC each year, which leads the nation in strengthening the mathematical capabilities of the next generation of problem-solvers. The six U.S. team members joined 70 of their peers from the United States and ten other countries at MAA’s Mathematical Olympiad Summer Program in June to immerse themselves in problem solving and train for the IMO and other international competitions like the European Girls’ Mathematical Olympiad (EGMO), where the U.S. team, organized by MAA, won second place in April.
The team was accompanied by coach Po-Shen Loh, professor of mathematics at Carnegie Mellon University, and deputy coach Sasha Rudenko, a graduate student at Carnegie Mellon University.
IMO scores are based on the number of points scored by individual team members on six problems. On each day of the two-day competition, the teams have 4.5 hours to work on three problems.
About MAA American Mathematics Competitions

Washington, D.C. (July 28, 2022) - The Mathematical Association of America (MAA) is pleased to announce Barbara Faires as the 2022 recipient of the most prestigious award for distinguished service to mathematics.

WASHINGTON, DC (July 28, 2022) – The Mathematical Association of America (MAA) is pleased to recognize Candice Price with its 2022 Inclusivity Award.

WASHINGTON, DC (July 28, 2022) – We are pleased to announce the 2022 award recipients for the Carl B. Allendoerfer Award, Trevor Evans Awards, the Paul R. Halmos-Lester R. Ford Award, the George Pólya Award, the Daniel Solow Author’s Award, The Chauvenet Prize, and the E...