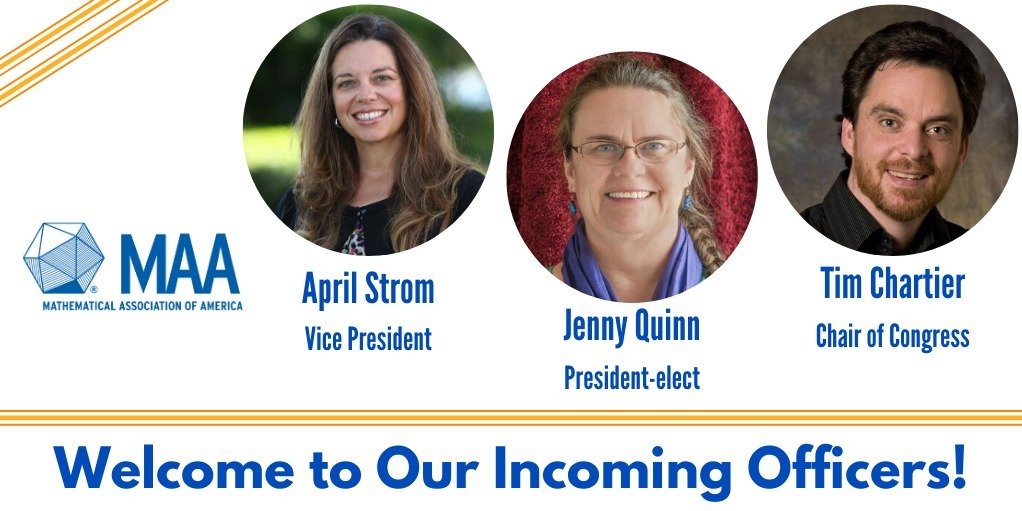 President-Elect
Jennifer Quinn is a professor of mathematics at the University of Washington Tacoma. She earned her BA, MS, and PhD from Williams College, the University of Illinois at Chicago, and the University of Wisconsin, respectively. She has held many positions of national leadership in mathematics including Executive Director of the Association for Women in Mathematics and for the MAA: co-editor of Math Horizons, Second Vice President, Chair of the Council on Publications, and Officer-at-Large on the Board of Directors. She received a Haimo Award for Distinguished College or University Teaching and a Beckenbach Book award for Proofs That Really Count: The Art of Combinatorial Proof, co-authored with Arthur Benjamin. Jenny has officially visited twenty-four of MAA’s twenty-nine Sections and pines for the opportunity to check the last five Sections off her MAA bucket list.
Vice President
Dr. April Strom has taught mathematics at the community college level for over 20 years. In addition to serving as the MAA Vice President, she is also currently a member of the U.S. National Commission on Mathematics Instruction and serves as the AMATYC Southwest Vice President. April has served as PI and Co-PI on various NSF-funded projects focused on both research in mathematics education and professional development of K-14 instructors. April co-lead the writing of the Classroom Practices chapter of the MAA Instructional Practices Guide and served on the steering committee for the AMATYC IMPACT guide. She received her Ph.D. in Curriculum & Instruction (emphasis in Mathematics Education) from Arizona State University, and holds an M.A. and B.A. degree in Mathematics from Texas Tech University.
Chair of Congress
Tim Chartier is a Professor of Mathematics and Computer Science at Davidson College. He is a past Vice President of the MAA and serves as Section Representative to the Southeastern Section of the MAA. Chartier specializes in sports analytics and frequently consults for businesses on data analytics questions, which have included consultation on problems for ESPN, the New York Times, the US Olympic Committee and teams in the NBA, NFL and NASCAR. Chartier is a recipient of the MAA's Henry L. Alder Award. His research and scholarship were recognized with an Alfred P. Sloan Research Fellowship. His writing has also been recognized with the Euler Book Prize, Beckenbach Book Prize, and the Daniel Solow Author’s Award. Among his outreach activities, Chartier has aided Google and Pixar in online educational outreach efforts.
“We thank our outgoing officers for their dedication and commitment to the association, members, and community,” said Michael Pearson, executive director of the Mathematical Association of America. “In these times, I am reminded of the talent in our community and I’m excited to see these amazing MAA leaders assume their new roles.”

Washington, D.C. (April 22, 2022) – The Mathematical Association of America (MAA) is proud to continue to close the gender gap in mathematics by awarding certificates to 632 young women for their participation in this year’s MAA American Mathematics Competitions (AMC). T...

Washington, D.C. (February 22, 2022) – Today, the results of the William Lowell Putnam Mathematical Competition, the pre-eminent mathematics competition for undergraduates in the United States and Canada, were announced. The 82nd annual Putnam Competition, administered b...