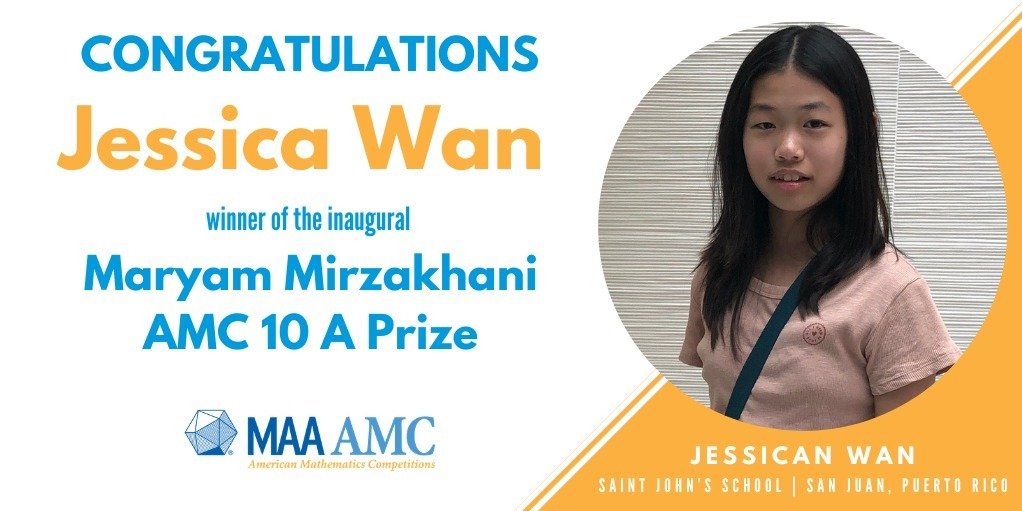 Washington, DC- Jessica Wan of San Juan, Puerto Rico, has been named the first-ever Maryam Mirzakhani AMC 10A Prize winner for her performance on the 2020 Mathematical Association of America American Mathematics Competitions (MAA AMC) tenth-grade competition. Jessica achieved a perfect score of 150 on the AMC 10A, higher than any other female participant in the United States. The MAA AMC 10A competition had over 36,000 competitors across the U.S.
Jessica is an 8th-grade student at Saint John’s School in San Juan. Jessica began studying extracurricular math and participating in math competitions in the 2nd-grade. Problems involving functional equations are her favorite to solve. Jessica was inspired to compete in math competitions by her brother, Edward Wan, who won a gold medal as part of the U.S. team at the 2019 International Mathematical Olympiad. Jessica shared that she is inspired by J.K. Rowling’s for her persistence. Despite being rejected by twelve publishers, she continued to pursue her dream. Jessica showed similar persistence by taking the AMC 10A at Florida Atlantic University in Boca Raton, FL, while evacuated from Puerto Rico after the 2019 earthquake.

Inaugural Maryam Mirzakhani AMC 10A Awards have been granted to 149 female students across the U.S. as top-performing female students in each MAA Section. The full list of award winners can be viewed here.

“It is an honor to recognize Jessica Wan and all of the Maryam Mirzakhani AMC 10A Award winners. These students deserve much praise for their hard work and dedication to problem-solving. I also hope that their achievements will encourage other talented girls to engage with the AMC."

Congrats Jessica Wan, the winner of the inaugural Maryam Mirzakhani AMC 10 A Prize for her performance in #AMCmath! She achieved a perfect score of 150 on the AMC 10 A! Learn more about the winners and how this initiative encourages girls to pursue math. https://t.co/jjiZMjE0Cg pic.twitter.com/d3GYx3VxO4

Washington, D.C. (April 22, 2022) – The Mathematical Association of America (MAA) is proud to continue to close the gender gap in mathematics by awarding certificates to 632 young women for their participation in this year’s MAA American Mathematics Competitions (AMC). T...

Washington, D.C. (February 22, 2022) – Today, the results of the William Lowell Putnam Mathematical Competition, the pre-eminent mathematics competition for undergraduates in the United States and Canada, were announced. The 82nd annual Putnam Competition, administered b...